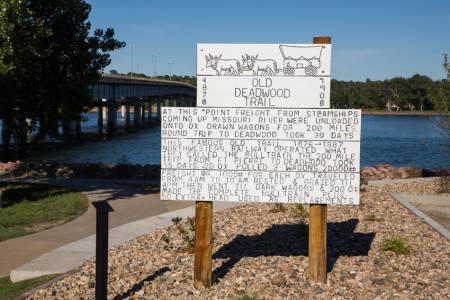 One of the famous trails is the Fort Pierre to Deadwood Trail (1876 to 1906) which began where steamboats would dock at the end of Hustan Ave in Fort Pierre near the southwest end of the present Colonel Waldron Missouri River Bridge.  The goods would be transferred to the ox driven wagon train for the grueling trip to Deadwood, South Dakota spurred on by the discovery of gold in Deadwood in 1875 with hordes of prospectors, gamblers and storekeepers headed for the Black Hills which was in the heart of the Great Sioux Reservation. The fact that they were trespassing on Indian land didn’t stop them and they kept coming from all directions. The shortest route to Deadwood was by steamboat from Yankton, South Dakota to Fort Pierre, South Dakota and then this famous trail took them across prairie and creeks to Deadwood. The wooden sign erected in 1975 stated, “At this point freight from the steamships coming up the Missouri River were unloaded onto oxen-drawn wagons for the 200 miles to Deadwood. The round-trip took 30 days over this famous old trail from 1876 to 1906. From 1876 to 1887, Northwestern Railway operated what they called the Bull Train. The 200 mile trip from Fort Pierre to Deadwood took 15 days. Twenty oxen pulled 3 wagons 20,000# of freight or 1,000# for each ox. They traveled from 4am to 10am, rested and grazed ox till 4pm then went again till dark. Thirty wagons and 200 oxen made the complete Bull Train plus extra 50 head used as replacements”.  Roy & Edith Norman, hired hands, families and friends erected the 52 signs every two miles marking the Fort Pierre to Deadwood Trail in 1975 from the Missouri River Bridge in Fort Pierre to the Pennington County line in South Dakota.   (Another person was to finish the signs from the Pennington County line into Deadwood).  In 2008, the Verendrye Museum Board of Directors and others from across South Dakota and other states celebrated the 100th Anniversary Commemorative Trail Ride (1908 the ODT was officially closed) with over 500 people involved in the Trail Ride to Deadwood during  the two week period from July 29th through August 7th 2008.

As Roy and Edith Norman grew into their retirement years, they had the foresight to leave a legacy by surveying and placing fifty-two signs approximately every two miles marking the Fort Pierre to Deadwood Trail from the Missouri River bridge in Fort Pierre to the Pennington County line in South Dakota.  Other people had agreed to complete the trail from the Pennington County line on into Deadwood.  Roy lived in Grindstone in his younger years and then moved to Fort Pierre and the Fort Bennett area before settling near the Kirley/Sansarc/Hayes area to raise his family.  During his life, he rode horse and became familiar with the original trails of the Native American Indians, the Army & Military posts and trails, the US Mail routes, Telegraphs routes, homesteads, Post Offices and towns in Haakon and Stanley County which were all important to the settlements of western South Dakota.    Roy dropped out of school in the 9th grade to help his family make a living but his knowledge of history and familiarity of Haakon and Stanley County sites/trails helped him mark the trails, routes, towns, road ranches, stage stations, original wagon ruts, etc. and tell the story of these historic landmarks.  They did the research, wrote the stories and then began making the signs with the help of their families, hired hands and others to build and place over 350 wooden signs (average cost was $86/sign) from 1975-1979 on eight different trails in central SD from the Cheyenne River south to Nebraska border and west from the Missouri River to the Pennington County line and into the Badlands (over 900 miles of trails) covering fourteen counties (Dewey, Gregory, Haakon, Jackson  [Washabaugh], Jones, Lyman, Meade, Mellette, Pennington, Shannon, Stanley, Todd, Tripp, Ziebach).  They traveled these trails several times when surveying, marking and placing the signs as Roy never put a sign up which he wasn’t certain it belonged there, traveling over 3000 miles and Roy used crutches so it was a good workout!  “The heritage should be kept in front of the people.” Roy Rogers Norman   [Edith Mae (Fackelman) Norman (73) passed away in 1980 and Roy Rogers Norman (82) passed away in 1983]

These famous trails from the Cheyenne River south to the Nebraska state line and from the Missouri River west to the Black Hills and Pine Ridge are as follows:

In the early 2000’s, many South Dakotans took the initiative to restore these historic trails/routes and landmarks at their own expense along with funding from the Deadwood Historic Preservation Commission and the Verendrye Museum.  Copies of the Fort Pierre to Deadwood Trail Map and the Historic Scotty Philip Bad River Trail from Fort Pierre to Philip can be obtained at the Verendrye Museum sites (Museum, Fort Pierre Depot, and the Log Cabin Visitor Center. 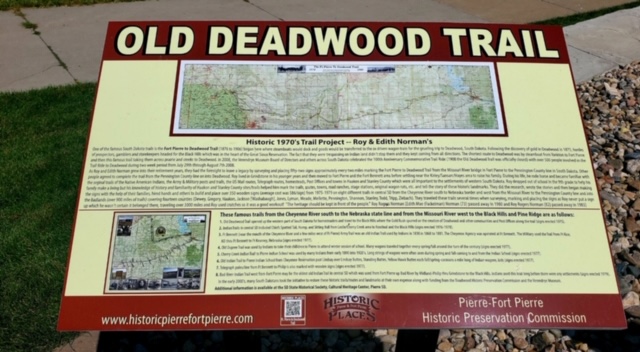 The Historic Trail Sign restoration project has been funded by the Deadwood Historic Preservation Commission since 2015 and is being supported by the Verendrye Museum in Fort Pierre with Roy & Edith Norman’s granddaughter, Deb (Stoeser) Schiefelbein managing the project in partnership with the Mike Piroutek Workshop in Milesville, Thompson Fencing in Pierre and the landowners of western South Dakota.