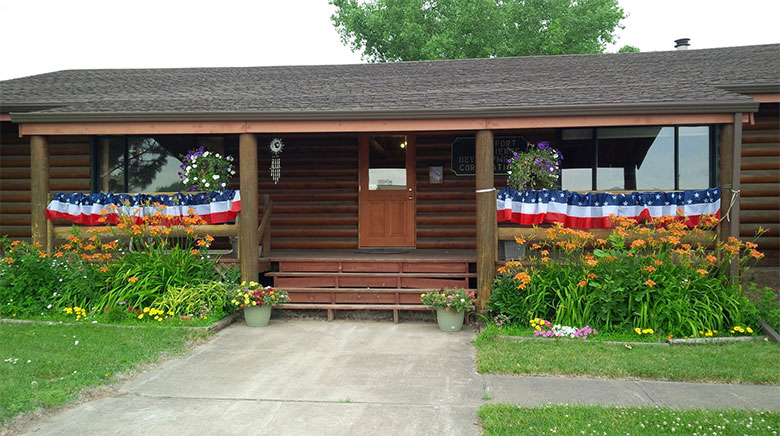 The original Log Cabin Visitor Center (30’ x 50’) was built in 1975 with log walls/beams, cedar shake shingle roofing, pine wood ceiling/flooring, and a full basement costing $36,738.38. It is owned and maintained by the Verendrye Museum and has served as a Visitor Center since 2000 which is open Monday-Friday from 9 AM-4 PM. Visitors will find a selection of brochures and information for Fort Pierre and the surrounding area as well historic displays and showcases depicting items from the pioneer history of the area. The office of the Fort Pierre Development Corporation is located in the Visitor Center and welcomes visitors and tourist to tour the Log Cabin Museum, Sansarc Country School Museum and Old Jail which are located behind the log cabin. The Old Jail (16’ x 20’) was built in 1905 at a cost of $400 with masonry walls, cedar shake shingle roof and iron bar windows/door. In 1975, Gene Stoeser moved the Sansarc School from rural Stanley County to this site and it opened in 2015 as a Country School Museum under the guidance of Deb Schiefelbein and Betsey DeLoache. 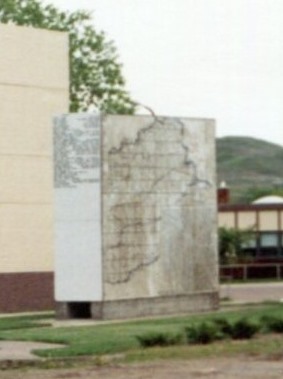 This large wooden map was located on the east side of the Log Cabin. It was constructed for the 1976 National Bicentennial Celebration. The sign was set on a concrete base that is 14 inches high and 18 feet long. This was the west side of the sign. It depicts the Old Stanley County as first organized. Later, Old Stanley County was divided into Stanley, Haakon and Jones Counties. 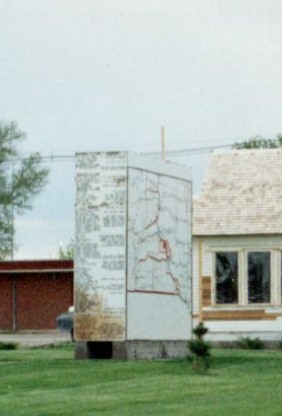 This is the east side of the large wooden sign. It shows the state South Dakota as it looked in 1889 when the western half of South Dakota was opened by treaty for settlement. In about 1985 this memorial fell into disrepair and was removed.

The Verendrye Museum Association incorporated as a non-profit organization in 1968 and opened the Museum on Deadwood Street in 1969 in the old masonry municipal building of 7500 sq. ft. which was used as a Community Hall. By 1971, with 10,000 visitors annually and no admission charge, the donated exhibits had grown beyond the available space, yet community supporters had offered items such as carriages, wagons, coaches, etc., which were too large and numerous to be housed in the existing building.

On the land where the Log Cabin Visitor Center sits today, was where the Old Stanley County Courthouse was located. When it was vacated on October 14, 1971, the Stanley County Commissioners approved a Resolution granting the Verendrye Museum permission to use the grounds for Museum purposes for two years during which time they were to present a satisfactory program for the permanent use of the grounds for historical purposes.