Another piece of history was added to Fort Pierre on July 4th, 2019. A large school bell weighing in at more than 800 pounds was permanently placed beside the Sansarc School Museum, located behind the log cabin on the corner of Hwy 1804/1st Street and Main Street in Fort Pierre

The almost century-old country school bell was initially placed in 1925 on top the Orton Country School at Mission Ridge, 45 miles northwest of Fort Pierre. The school officially closed in 2015. Verendrye Museum Vice President Deb Schiefelbein, Peggy Tibbs and Phyllis & Lynn Fravel began brainstorming how they could purchase and relocate the bell to Fort Pierre. Brandon Vevig transported the heavy bell to Fort Pierre. The bell needed a pedestal, but Brian Scott and friends decided an ordinary base wouldn’t do justice to the bell. Therefore, they created a heavy pedestal crafted from the metal structures of a 1907 bridge near White River, SD, donated by the Bak family.

During the dedication, Verendrye Museum Board President Randy Seiler provided the welcome to the more than 100 people who attended, including other Verendrye Museum Board Members. Toni Ruff gave a beautiful performance of the National Anthem, while Zay Norman rang the bell for the first time at its’ final resting place, with several school children following suit. Local residents Phyllis Fravel, Darla Tibbs and Lynn Fravel shared their stories about their experiences at the Orton Country School. In advance of the ceremony, Habitat for Humanity prepared the Sansarc Country School Museum by giving the building a fresh coat of paint.

Visitors can ring the historic bell and visit the historic school museum, log cabin, historic jail and railroad depot which are within short proximity. 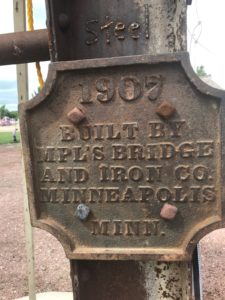 Bridge plate from the 1907 bridge near White River, SD